Indonesia is in a very active seismic zone and is the country with the most earthquakes.
On Sunday, December 26, 2004, the west coast of Sumatra was hit by one of the largest earthquakes ever recorded. The earthquake with a magnitude between 9.1 and 9.3, triggered a series of devastating tsunamis along the coasts of most landmasses bordering the Indian Ocean, killing over 230,000 people in fourteen countries, and inundating coastal communities with waves up to 30 meters (100 feet) high. It was one of the deadliest natural disasters in recorded history. 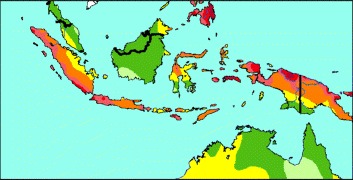